The Chinese Classics on Tai Chi Chuan form say that:
“doing the form repeatedly is like climbing a high mountain- the higher we climb the clearer we see. We feel calm as the empty sky and flow like the river. We feel ecstasy in the experience of oneness of body mind soul embraced in the arms of Heaven and Earth,
united with nature.”
Chu Tai Chi Abbreviated

Includes approximately 100 hrs in addition to the initial hours necessary for Chi Kung Instructor/Practitioner Certification. Public group classes, individualized lessons and supervised instruction of Tai Chi Yang short and long, Double Edge and Broad Sword forms, Push Hands and  self defense applications are included. The training is a proficiency program and some students will need more or less than the  estimated hourly approximation. When intern has attained sufficient skill, a test of the Tai Chi Forms, Chi Kung and Nei Kung sets will be conducted with Seymour or a Certified instructor to decide if certification is to be awarded and/or what points require adjustment and fine tuning. 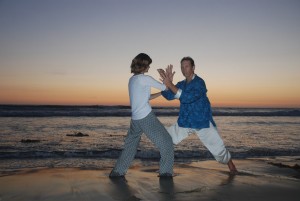 Tai Chi, formally called Tai Chi Chuan means Supreme Ultimate Fist. Tai Chi was conceived to integrate the forces of nature (Yang and Yin) into a martial art. When these correctly  aligned  natural body movements are coordinated  with breathing and a still focussed mind, Tai Chi becomes a highly effective Martial Art that can be done at any age while simultaneously achieving  great health benefits. The Tai Chi  self defense applications of yielding, root power, using 4 ounces to deflect 1000 lbs, repositioning ourselves to a centered place and neutralizing powerful external forces, overflow into our ability to keep ourselves steady while flowing with the many otherwise exhaustive conflicts that arise in our life relationships. With a strong center, extreme situations (arguments, stress, sickness) become welcome  fine tuning catalysts on the journey of our life purpose and  for evolving consciousness.

Practicing Tai Chi From, builds Jing (Life essence -a reservoir of energy that condenses to form the foundation and expands to catalyze the creative power of every body structure and human function), Chi -energy in motion, and Shen the calm and alert  spirit that balances all mental functions.

In practicing  Tai Chi Chuan  both slowly and quickly, one develops internal core strength, flexibility and an intuitive level of consciousness that is integrated into a smoothly functioning body mind spirit. The Taoists said of this level of  living

“Wu Wei Wu Yao But Wei =Do Nothing, yet Nothing Left Undone”

We're not around right now. But you can send us an email and we'll get back to you, asap.